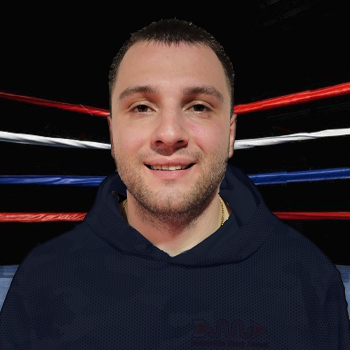 Former U.S Army team leader and current Firefighter Nick Young has trained consistently in martial arts since the age of 13.  Nick began as a boxer and was introduced to the art of Muay Thai in 2014, where he excelled under the tutelage of Alexander Banks.  Nick also trained in Army combatives from 2017-2018, and in 2017 he started a Muay Thai program while in the army in Fort Hood, Texas.

Nick has competed as an amateur fighter in Boxing, Kickboxing and Muay Thai.  He ‘s competed for the International Kickboxing Federation (IKF) and World Kickboxing Association (WKA) circuit, where he won the 2017 WKA championship in New Jersey with an official amateur record of 5-1.

Nick moved to Apex Martial Arts Center in 2021, where he now teaches Muay Thai and Kickboxing in the Advanced Kickboxing Classes.  Nick is also competing again and is scheduled to compete in the IKF World Championship in Orlando, Florida in the Summer of 2021.